As an American Executive MBA student at the Stockholm School of Economics (SSE), Mary Fisher soon discovered an array of cultural differences in business between the US and Sweden. She told MBAGRADSCHOOLS about her experience of culture shock, how her executive coach at SSE helped her overcome cross-cultural differences, and what she’s up to post-MBA. 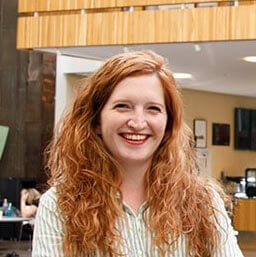 “I was constantly negotiating all of these different people, different fields, and different ways of thinking about things. The coach was really helpful in just slowing down all of those thoughts. It really helps reflect on the program as you’re going through it.”
Mary Fisher – Stockholm School of Economics
Go to video

When searching for an MBA program, Mary knew she wanted an international experience. With her sights set on Europe, she landed at the Stockholm School of Economics (SSE). At the same time, she was offered “an amazing position at work.” She decided to do both!

“It was too good to be true,” Mary says. “The price of the MBA in Stockholm, including flights and hotels, was a better value than an MBA in the US.” (01:13) With 10 in-person weeks spread over a year and a half, Mary flew from New York to Stockholm to connect with her classmates and bring what she learned back to work.

“[My employer was] very supportive of the journey because they knew what I was bringing back to the institution,” she tells us. “It was really an experience I couldn’t have had at hardly any other school.” (02:21)

“Being the business school that’s number one in the Nordics, with this reputation of being the number one finance school in Sweden, I expected very buttoned-up, very aggressive people.” she explains. “I think because I’m also coming from the New York mindset, working with a lot of East Coast Ivy League MBAs. When I got there, everyone was so friendly and helpful. It was not what I was expecting at all. I was a little taken aback and I did have some culture shock.” (03:18)

There are plenty of cultural differences in business between the US and Sweden. The main difference is work-life balance. In Sweden, it’s normal for workers to take a summer vacation and regular coffee breaks. Swedish parents also receive 16 months of paid parental leave. On the other hand, research shows that American workers log 7-19% more time on the job than Europeans. They are also less likely to spend all of their vacation days.

Overcoming cultural differences in business between the US and Sweden

As an American MBA student in Sweden, Mary became inspired by the Swedish way of working and thinking.

She says, “I found that I would go into meetings in New York and wonder why people [weren’t] trying to be more harmonious. In Sweden, you sit down and the beginning of the meetings is very long. In the environment I was working in, it was much more direct.” (05:44)

With the help of an executive coach – a key aspect of the Executive MBA program at SSE – Mary continuously reflected on the cultural differences in business between the US and Sweden.

“In my group, we had people coming from the forestry industry, the military, startups, lawyers, accountants, computer scientists, so I was constantly negotiating all of these different people, different fields, different ways of thinking about things, when to lean into the Swedish part, when to use my American lens,” she recounts. “The coach was really helpful in just slowing down all of those thoughts and saying, ‘What’s the advantage of doing it this way? What’s the advantage of doing it that way?’ It really helps reflect on the program as you’re going through it.” (04:38)

During her EMBA, Mary’s organization was going through a reevaluation of its mission. Mary was tasked with trying to find out “how does a 200-year-old arts organization make an impact in today’s society?”

“When I went into the EMBA with that question, I was speaking with all these professionals from different fields [and] different backgrounds. [With] all this information [and] all these insights, I was able to look at our question,” Mary tells us. “It’s very narrow, but I didn’t realize how myopic I was being. There was a whole world of other questions [and] applications that I hadn’t been looking at.” (09:30)

Mary describes her learning outcomes as “immediate,” bringing new insights and applying them to the next staff meeting straight away.

Mary has since left the organization and is taking a planned career break to explore non-profit organizations from the lens of a board member and volunteer. “This year has been to reflect on, ‘What about the MBA do I want to pursue?’ There were so many courses [and] so many different paths you can take,” she says. “In 2022, I’ll start looking to see what my next adventure is.” (11:08)

Whatever Mary’s next adventure is, she will certainly continue to discover valuable cultural differences in business and bring her lessons from Sweden and the SSE EMBA with her.