After learning to thrive in a new culture, Chinese student Jifu Yao’s career is progressing exactly as he hoped when he started his MBA. He explained to us why patience was crucial to secure a dream job at Google after graduation. 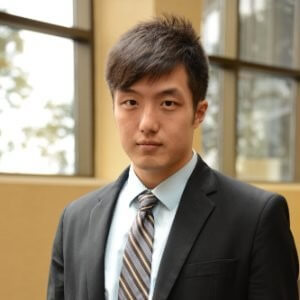 It’s not easy adapting to new surroundings. Whether you change job, location or school, the transition from the known to the unknown can be a challenge for even the most confident students.

When Jifu Yao moved from China to the United States to study an MBA in Supply Chain Management at Whitman School of Management, he had to prepare himself for a culture shock. But he knew that in order to deal with it, he needed to learn to embrace the cultural differences between the two countries. It was the only way to survive – and thrive.

“Speaking as a foreigner from China, which has a different culture, and landing in the United States, you need to be more open, ” he tells MBAGRADSCHOOLS. “You need to be more willing to talk to the people around you because I feel like the culture in the Western world is more of being yourself and asking for what you need. In the Eastern world, it’s more whoever is teaching or leading you to tell you what to do.” (03:35)

Jifu’s initial struggles to adapt led to greater rewards later on. By recognizing early on the differences between China and the United States, and trying to embrace them as much as possible, he was able to quickly adapt to his new surroundings. He outlines some of his biggest challenges when he first arrived.

“I think positioning yourself in the right place and not being afraid to ask the questions you are not aware of. Not being afraid of being shy, or reaching out to people to ask for help. I think they were some of the biggest challenges in the beginning, but it’s very rewarding after you fight through it,” he reflects. (04:42)

After graduating from Whitman School of Management, Jifu admits that securing his first job was difficult. But the combination of an exhaustive job search, his work experience, and his cultural background eventually helped him secure a job at a local distributor.

“The first job I had was with a small company. They actually had a manufacturing contract with China and they’re the distributor of their product in the United States. So they needed someone who can help them with their supply chain efficiencies and have better communication with their vendors in China,” he explains. (08:58)

His first job may have been hard to come by, but after two years in the role, Jifu was already thinking about the next step in his career. And next steps don’t come much bigger than Google. Noticing an opening at the company for a Supply Planning Manager, he was able to leverage his connections at Whitman to give him an edge over other applicants.

“I reached out to one of my [fellow] alumni who actually worked for Google, seeking their opinion on what kind of background they were looking for in terms of this position…that’s a connection I had through Syracuse University, and that actually really helped,” Jifu says. “Because of his feedback, I was able to better prepare myself and know in advance what they could potentially ask.” (09:49)

In the end, Jifu’s professional network made the difference. He got the job, and was placed in charge of the supply chain for Pixel phone service parts. Jifu’s career has continued to progress since Google. He subsequently moved on to another tech giant – Amazon – and is enthusiastic about the direction his career has taken post-MBA.

How an MBA opens doors in your career

Although his network gave him the insights he needed to ace the interview at Google, Jifu says it was the MBA that put him in that position in the first place. The fact that it came from such a respected institution added even more value to his application.

“I think having an MBA degree was very important [for Google], especially an MBA from a school that has a good reputation all over the country…this is definitely a highlight on my resumé. The degree is really what opened the door,” Jifu says. (11:45)

The MBA gave him the platform he needed to secure a dream job at Google. Jifu says that the soft skills he learned during the program have also helped him to thrive in his new role.

“During a meeting with co-workers, when to raise a different idea, when to push back in the right way and then when to give negative feedback [without] harming the relationship with other co-workers.” (05:24)

As someone who was able to call upon fellow alumni to help him secure his dream job, Jifu understands the value of a strong professional network. And that forms the bedrock of his advice to prospective MBA students.

“Even though you did a lot of mock interviews with someone else, the real interview is always going to be different,” he adds. “[But] you can only learn when you have had those experiences, so do everything faster, earlier, better and you’ll have a better chance [of succeeding].” (18:15)

WATCH: The alumni network that helped Jifu land a dream job at Google