Home > Finding a job post-MBA amidst a turbulent pandemic

The coronavirus pandemic was a shock to everyone’s system. For MBA student Diego Cammarano, his experience at ESMT Berlin turned out to be a more exciting rollercoaster than he was expecting. He tells us why he chose ESMT Berlin in the first place, how the pandemic affected his MBA experience, and how ESMT helped him find a job amidst all the turbulence.

“I loved working with the Career Services team and interacting with them. They’re always open and willing to share their ideas, they’re willing to introduce you to someone in their network. They know how to help and they want to help as much as they can.”
Diego Cammarano – ESMT Berlin
Go to video

A light at the end of the tunnel: How ESMT helped Diego find a job (in nuclear fusion!) amidst the pandemic

Its location played a big role in Diego’s choice to study at ESMT: Berlin is a diverse, dynamic city, home to several exciting startups – and Diego was eager to capitalize on the network.

While the school continued to offer career and networking events online, Diego ended up finding his current role directly through a project in his MBA program. As part of the program, students are required to complete a consulting project for a client. Students work in small teams – with help from professors and other professionals – to apply lessons learned from their MBA studies and knowledge gained from prior work experience, to help their client company achieve their desired goals.

Throughout the MBA program, Diego realized that he was interested in nuclear fusion (wow!). For this final consulting project, he managed to get in touch with a co-founder of a nuclear fusion startup based in Grenoble, France. Luckily, “things went well, both from the company perspective and from the academic perspective because the feedback was very positive,” Diego explains. “There was a match between my profile [and what] they were looking for…So that’s it.” (07:42)

Diego gives huge credit to the Career Services team at ESMT Berlin. “Marcel and Sophie are great, I loved working with them and interacting with them,” he tells us. Besides the more “traditional” support such as CV review, cover letter review, and workshops, Diego says “the help that they provide along the path” proved invaluable to his career growth. “They’re always open [and] willing to share their ideas, they’re willing to introduce you to someone in their network. They know how to help and they want to help as much as they can.” (08:31)

Another key component of Diego’s MBA experience was coaching.

“I’ve never had a professional coach, but it was a groundbreaking experience for me,” he says. “It made me think about [things and] asked me questions that I would have not done otherwise. The fact that I realized that this is the industry I want to work for came up. And I actually realized that this was [my] path only because of the coaching sessions that I had…It’s really nice to have and something I wasn’t expecting, but I much appreciate.” (09:31)

The calm before the storm: Deciding to do an MBA at ESMT Berlin

Inspired by his peers and managers who had done an MBA, Diego decided it was time for him to take the leap.

He chose ESMT Berlin for a few reasons:

Despite the fact that 2020 didn’t really go as planned (to put it mildly), Diego remains happy with his choice to study at ESMT Berlin.

Being an MBA student on the rollercoaster of 2020

At the beginning of his MBA program, Diego recalls being shown a graph illustrating what kind of “rollercoaster ride” the students could expect from their MBA experience:

Little did they know how much of a rollercoaster 2020 would turn out to be.

During the pandemic (and his MBA experience), Diego made some slight adjustments to the original graph to reflect the new situation: 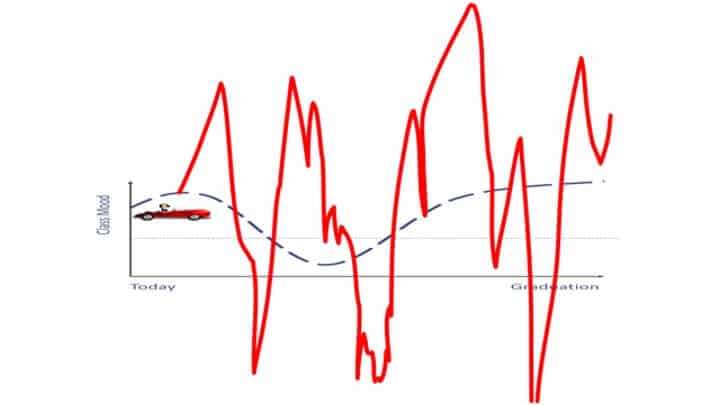 “At the end of the day, it was journey [that was] way more extreme…compared to what we expected,” Diego says. (05:40)

“The school coped pretty well,” he adds. “All things considered, they stepped up and really helped and really did what they could.” (12:31)

Is an MBA what you need?: Think about your post-MBA objectives

Diego honestly tells us that he doesn’t know if he would’ve decided to do an MBA during a pandemic. On the other hand, he says, “For other people with their own experience and background might find this [to be] what they need.” (10:54)