Sam had been competing on the international circuit for Team USA since 2013, and in 2016 won a silver medal at the Rio Olympics in the synchronised diving event. However, ongoing injury concerns eventually meant he was forced to call time on his diving career. Although for many that may have been earth-shattering, for Sam it was simply a chance for a fresh start in his life to follow a recently-acquired passion of his. 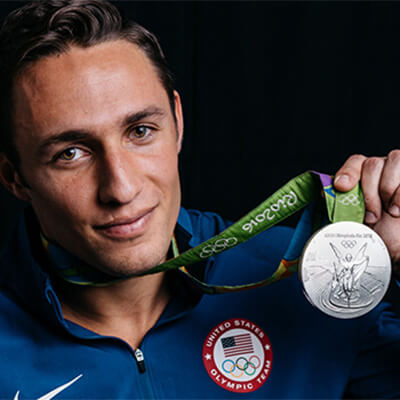 “In my eyes it [the key to passing the GMAT] is taking the attributes from sports of creating goals, setting a plan and working towards the execution. That execution comes down to the day-to-day and if you can perfect your day-to-day then you won’t have to focus on the end goal, because the end goal will happen.”
Sam Dorman – Miami Herbert Business School
Listen to the podcast

In a new podcast series from The Modern MBA, current & former MBA candidates explain how they are making the transition from typically unorthodox MBA sectors such as the arts, healthcare and hospitality into business. In the latest podcast, Sam Dorman explains how he has made the jump from being part of Team USA at the 2016 Rio Olympics to studying for an MBA at The University of Miami Herbert Business School. Although it may initially seem like a peculiar move to make, his reasoning for the shift becomes clear by the end of the podcast.

During his time as a professional athlete Sam’s interest in business had been piqued by his attempts to seek endorsements to support his career. That interest was further ignited after the end of his career, when he started to learn about how a business works during his time at a boating company. Sam goes on to describe in detail why he chose Miami Herbert Business School, the best thing about studying for an MBA so far and how he has managed to zone in on a future career path post-graduation.