In celebration of Pride Month, we showcase the business schools around the world that amplify LGBTQ+ voices in their programs and put representation at the forefront through LGBTQ+ programs, student clubs, and more. 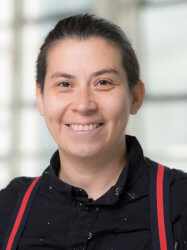 “Imperial [College] has “Imperial 600”, which is a really nice LGBTQ+ organization where we can all be ourselves and we can all make the college a better place.”
Dra. Adriana Navarro Suarez, Marie Sklodowska-Curie Individual Fellow – Imperial College Business School
Go to video

While LGBTQ+ rights have advanced dramatically over the past 20 years, there is still a long way to go when it comes to shaping inclusive environments.

According to BCG, for example, 40% of LGBTQ+ employees are closeted at work. For Dr. Adriana Navarro Suárez, Marie Sklodowska-Curie Individual Fellow at Imperial College, being openly gay has never been a problem. “Imperial is quite a diverse university…so it’s quite easy to fit in,” she says. “I think people can be whoever you want. I’m openly gay in my group and that has never been a problem.” (01:59)

Adriana adds, “Whenever someone thinks about scientists, they think about this white guy with the white hair, kind of an Einstein with a lab coat – but actually, it’s not. It’s a lot of people like me.” (02:33)

Whether you’re a business leader, student, researcher, or scientist, there’s no one-size-fits-all. To build more inclusive societies, business schools can play a critical role in embedding inclusion into their programs and the culture they create for students in the classroom.

Whether it’s through events, student clubs, or programs, business schools around the world are demonstrating their support and allyship to the LGBTQ+ communities within their schools. Let’s take a look at a few examples:

As mentioned earlier, quite a high percentage of employees are closeted at work. However, corporations are trying to address this diversity gap – and leading business schools are responding.

One example is the Stanford Graduate School of Business’ LGBTQ Executive Leadership Program, which was created because of the underrepresentation of LGBTQ individuals in executive leadership positions globally.

Similarly, London Business School’s LBGTQ+ Executive Leadership Program is designed for LGBTQ+ leaders looking to navigate a significant professional transition, supported by a diverse classroom of global executives across the spectrum of genders and sexual identities.

As a historically underrepresented group, LGBTQ+ individuals continue to increase their presence in universities.

At business schools across the globe, you’d be hard-pressed not to find an LGBTQ+ student club. At Imperial College, Imperial 600 is a network for LGBTQ+ staff, postgraduate students, and their allies. Adriana says it’s “a really nice LGBTQ+ organization where we can all be ourselves and we can all make the college a better place.” (02:17)