In this episode of The Modern MBA podcast, in collaboration with MBAGRADSCHOOLS, we spoke with Georg Singer, an MBA graduate from the University of St.Gallen, who leveraged his degree to transition into a career in carbon intelligence and sustainability. 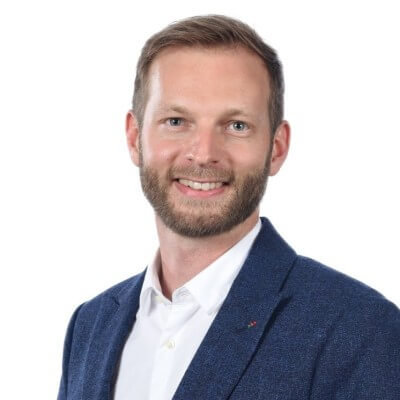 “It became obvious to me that the University of St.Gallen was the right place to go to because it has a very good reputation, especially in the German-speaking world.”
Georg Singer – University of St Gallen
Listen to the podcast

Georg’s pre-MBA career: An engineering background with a focus on data analytics and energy consumption

I did my bachelor’s and Master’s in Polymer Science and Engineering. After graduating I had to decide if I wanted to stay in academia. I thought I wanted to do something different after six years of studying and decided to go into the industry and started in a material R&D role at a company based in Vienna, Austria. With that company, I got the opportunity to go to Texas, where they had a production plant. After, I went back to Europe and changed companies, but this time, I worked for a polymer producer, like a producer of polyolefins that are used a lot in the automotive industry or in infrastructure. Then, before moving out of this technical role, I transferred to Switzerland for private reasons and changed companies again. I always changed the company for mostly private reasons and had to start over to get to know the company and get more responsibilities.

After some time I transferred again but this time in the furniture industry. A company that is producing hinges and rollers systems for furniture, their market leader and the biggest customer is IKEA, for example. There I kind of carved out a project for myself because it was a topic close to my heart. I was part of a project team, evaluating the potential of a data lake to collect all kinds of different data in the organization and this is when I realized that we were actually collecting energy consumption data of many of the products and production machines. This is when I initiated a project where I evaluated this energy data to come up with CO2 balances to find out which are the products that are most resource-intensive. That was something that really sparked the fire.

After initiating this project, this is when I decided to pursue an MBA to also understand more of the business side and get the bigger picture of how you can make an impact not only from an R&D perspective, but from a strategic company perspective as well. (01:06)

How did you go about choosing your program and why the University of St.Gallen?

When I was thinking about doing an MBA, or in general, if you think about doing an MBA, it’s always important to have in mind where you want to end up afterward in terms of region. I figured out that my goal was actually to stay in Europe in the Germany, Austria, Switzerland region. Then it became obvious to me that the University of St.Gallen was the right place to go to because it has a very good reputation, especially in the German-speaking world. (08:44)

It's a one-year program, tell us about what your experience on the course was like.

Overall, I would say it was a fantastic experience. We had two months in the beginning where there were still face-to-face classes and after that, everything went online. But these two months, in the beginning, were absolutely crucial to get to know your classmates. We had a program of about 45 people from 30 different nationalities and from different backgrounds, and it was great to work with them in groups. This is also what I heard before doing the MBA; most of the people that I talked to said the most valuable part is the people that you meet, and this is definitely true. (10:43)

What do you think is the biggest challenge that companies face when they're looking to improve their energy consumption and balanced CO2 emissions?

That’s a big question. I think one of the biggest challenges may be because I think it is clear to many companies that in the long run, it will be necessary to reduce the consumption or change the sources of energy to renewable energy. Of course, we’re facing some other issues and it’s not easy for a big industrial company to change the way they produce things from one day to the other. This is one of the challenges that companies face now; it requires courage to invest because it won’t be enough for the long run to just change the source of energy for the company. To really reach the net-zero goals 2050 will require creating new value chains and changing the way things are made. And as a consumer, you can only create a certain pressure by the way, or the goods you consume. Bigger corporations are the ones who can actually create much more impact by changing the way they do things and I think this is where it needs courage and investments. (15:37)

WATCH: Transitioning into a career in carbon intelligence and sustainability

Become a leader who thrives in challenging environments