Marco Balarezo is a native of Peru who has lived in various countries throughout the world including Chile, Spain, the Netherlands and the United States. He studied for an MBA at the Rotterdam School of Management, Erasmus University (RSM) before recently starting a role as Operations Manager at Amazon in Barcelona. MBAGRADSCHOOLS chatted with him to learn more about how he came to live in so many different countries, his motivations for studying an MBA and how his journey has still had the capacity to surprise someone as well-travelled as him.

As the son of a diplomat, Marco had the chance to live in several South American countries when he was growing up before moving to the United States, where he spent his undergraduate years. After ten years working in his native Peru, he decided he wanted to rediscover his wanderlust and set himself up for a new career abroad. An MBA seemed the perfect way to do that.

“The good thing about this program is that it was not static – kind of like my life!”

Having already studied in the US, Marco wanted the opportunity to explore all that Europe had to offer. After doing his research and reaching out to alumni, which he saw as a big factor in his final choice, he settled on RSM as his MBA study destination. It has the highest proportion of international students of any business school in the world, so for the internationally-minded Marco it was a perfect fit. In actual fact, the highly international make-up of the class surprised even Marco!

“I’m on a path where I feel that I belong”

During the MBA program he had the opportunity to work on regular team projects. This focus on teamwork proved to be a major takeaway for Marco as it also allowed him to develop his leadership skills and learn that it is important to be vocal, but also to know when to listen, take a step back and delegate when necessary. Now working as an Operations Manager for Amazon in Barcelona, Marco asserts that his time at RSM set him up to achieve his goal from day one: to work for a company outside of his home country and continue his globe-trotting existence.

Would you like to learn more about styding an MBA degree at RSM? Reach out to Marco Balarezo directly and ask him anything: 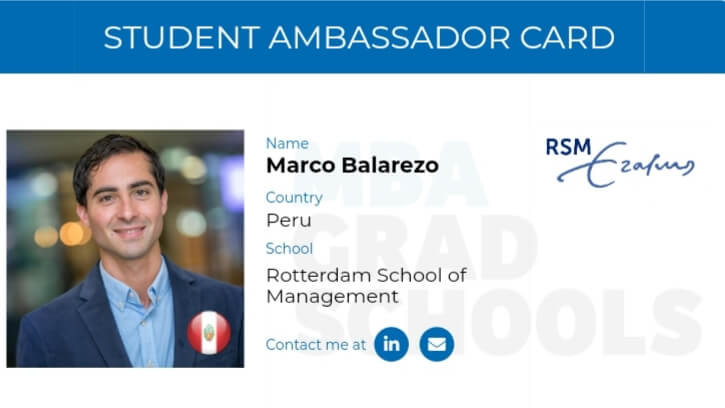