The value of adaptability at HKU MBA

– The University of Hong Kong, HKU

Rajendra Shoff is an alumnus of the HKU MBA. He told MBAGRADSCHOOLS why this program is different, the benefits of a diverse intake, and receiving advice that you simply can’t get from a Google search.

Why did you decide to do the MBA at the University of Hong Kong?

I decided to choose the University of Hong Kong simply because I had heard very good things about it. I had also heard that in addition to a finance specialization, they were really covering the intersection of technology and business – and I felt that’s where I really wanted to be.

The intersection of technology and business really resonated with me because in my time at an insurance company, I had noticed there was more and more of a push towards digital transformation within the industry.

I started to ask myself: “Okay, if we’re doing digital transformation now, what’s the next step? What happens later? And where do I want to be in terms of positioning myself professionally?” I didn’t know the answer to this as I walked into business school, but I did know that I wanted to go to an institution that really covered the technology aspect of business. Hong Kong University actually did that instead of just saying they do it.

What type of student does HKU attract?

Obviously if you’re trying to study in Hong Kong then you’re going to attract a lot of people that want to be in finance. But at the same time, at the University of Hong Kong in particular, they attract people from a lot of different cultures and countries. My classmates were from anywhere from Portugal to Peru, so you had that diverse mindset, different cultures…and when you put all of that together, it actually becomes a fairly laid-back environment where there’s a lot of idea exchange.

The environment and the culture there was almost like a mature undergrad situation where you had people that knew what they were talking about, but were still there to have a good time and to make the most of it. I think we realized that if you’re going to a business school, this is probably the last time in your life where you can do absolutely anything you want and grow as an individual.

What is the overall value of an MBA?

The word I think of when someone says MBA is ‘adaptability’. This has become increasingly important over the last five to 10 years, and it’s actually critical now. A couple of my professors that I looked up to told us that the way they made it in an industry is that they reinvented themselves every five years.

Going to do an MBA really helps you to do that. What an MBA does for you is that it puts you in touch with people that have made this transition. It really expands your network and it shows you what is possible. So instead of doing a Google search saying “What can I do in terms of my career?”, you can talk to people that have done it or are doing it. This is not knowledge you will find in any textbook or any kind of forum.

Keen to learn more about studying an MBA degree at HKU? Reach out to Rajendra directly and ask him anything: 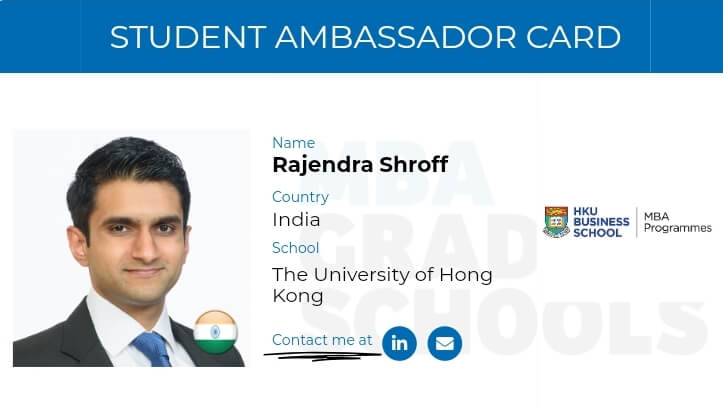