Facing increasingly complex environments and global crises, leaders today need to lead with purpose and forward-thinking ideas. In an interview with Prof. dr. Svetlana Khapova, Professor of Careers and Organization Studies, Head of Department M&O at Vrije Universiteit Amsterdam, she discusses VU’s Executive MBA: Leading with Purpose and why the program focuses on developing thought leaders of the future. 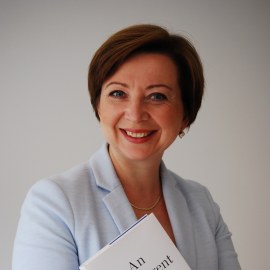 “Many schools are looking for approaches to create impact. I think we found an interesting approach that really distinguishes us on the market of other business schools: We work with thought leadership. What we mean with that is we actually refer to [the] belief that there’s a power in words.”
Prof. dr. Svetlana Khapova – Vrije Universiteit Amsterdam -VU
Go to video

What is the VU Executive MBA: Leading with Purpose?

Vrije Universiteit’s Executive MBA: Leading with Purpose is an 18-month MBA program, with courses taking place once a month from Thursday to Saturday.

The program supports its students to dig deep to uncover their purpose and become positive changemakers in the world around them.

Distinctive from other MBA programs, VU’s Executive MBA is all about knowledge co-creation and working together to ask the bold, challenging questions in order to accelerate its students’ development into more forward-thinking and purpose-driven leaders.

Why thought leadership is the future

“Many schools are looking for approaches to create impact,” Svetlana says. “I think we found an interesting approach that really distinguishes us on the market of other business schools: We work with thought leadership. What we mean with that is we actually refer to [the] belief that there’s a power in words.”

Svetlana uses the example of recent social movements to demonstrate the power of words, as many of them have been ignited by a single social media post. “In that sense, we see this as one of the future characteristics of leadership: being a thought leader,” she says.

“We focus on at least two things,” Svetlana explains. “[The first] is an evidence-based approach, and second is an inquiry mindset.”

An evidence-based approach is relatively straightforward: “You don’t write a piece or an essay or a powerful letter that you would like to publish publicly based on your opinion,” Svetlana says. “You do need to engage in collecting evidence.”

Thought leadership is about impactful storytelling and making positive change through powerful stories. “But without evidence,” Svetlana says, “it has little value. We need to bring all the knowledge we have on the topic and find ways to integrate that knowledge so that it makes sense for society…and that [it] actually can add value.”

When it comes to developing an “inquiry mindset,” Svetlana says, “Many things that we’re dealing with in the world today require us to ask questions…And that is the inquiry mindset where we don’t only consume, but we actually ask questions and try to generate new knowledge.”

The power of storytelling to make real change

While VU Amsterdam’s Executive MBA boasts an effective methodology focused on building thought leaders, Svetlana reminds us that the program’s primary objective is to focus on contributing to society, creating movements, and shaping the world.

“It also helps executives to use these pieces to create their personal brand,” Svetlana adds. “If we don’t communicate publicly, if we don’t write interesting essays…how can we be recognized? And I think for many leaders, especially those who engage in leadership positions, it’s quite important to gain this recognition among their team members…And I know it’s difficult. And I think the beauty of the program is it actually prepares for that and there are other peers who are in the same challenging situations and they are maybe fearful of…courageous conversations. But this is what [the] program is about and we know that participants love it, and they enjoy it and they learn enormously from it.”